Should I Install a VPN Software or VPN Router in my Office?

Should I Install a VPN Software or VPN Router in my Office?

A VPN Software is an application installed on a device, it protects the device running the application.

A VPN Router is a router with a pre-installed firmware that lets it run VPN encryption, it protects network traffic from all devices going through the router.

Before We Decide, How does a VPN work?

A VPN protects an office network by directing internet traffic towards a server for VPN encryption and masking the original IP address from external networks in the process.

It is often debated between IT specialists if using VPN softwares on office computers or VPN routers is a better security and privacy network solution in a business environment. The purpose of this article is to weigh whether VPN software or VPN router is more beneficial to your business by exploring each option. 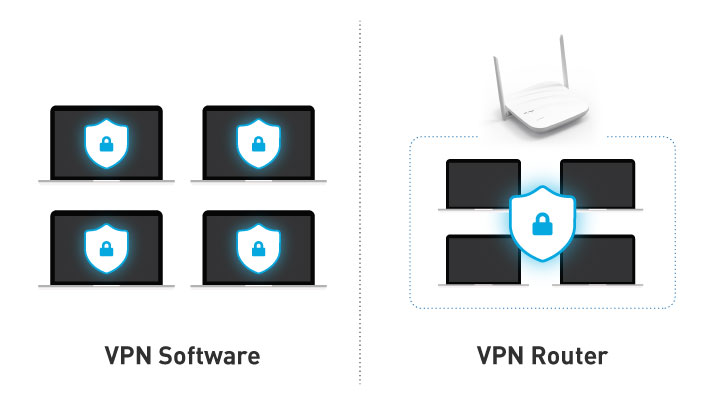 The encryption speed of a VPN software depends on the processing power of the device running the application, a high-end computer with a powerful CPU would run VPN encryption faster in comparison to a commonly used office computer.

A VPN router’s encryption speed depends on the processing speed of its chipset and firmware. A VPN router’s chipset is optimized to run high speed VPN efficiently.

Naturally, a VPN router’s encryption speed is faster and more efficient than most commonly used office computers; however, some high-end computers are capable of running VPN software encryption even faster than a VPN router.

The network security of an office network is only as strong as its most vulnerable connected device. An office network consists of not only computers that need a secure network but also other devices connected to the same network, including printers, TVs, and other smart office devices.

The deployment cost depends not only on the number of connected devices but also the combined network usage of all devices.

A VPN software is beneficial for office environments that have few devices, with each of them consuming a large amount of data. The cost constraint would be the subscription per device when expanding the network in the future.

The hardware cost of a VPN router is more expensive than a regular router. However, a VPN router is beneficial for office environments that have a large amount of devices, with each of them consuming low network data usage. Most of the VPN services count VPN routers as a single device despite the number of devices connected to the VPN router, thus saving VPN subscription expense when connecting to a large number of devices. However, the constraint would be the encryption processing capacity of the VPN router when handling network traffic from multiple devices.

If you are looking to protect your office network, click here to learn more or contact us!